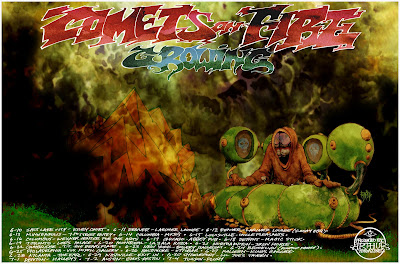 Wow. It’s been a long time. I have been locked in a jam space in East Oakland with Howlin’ Rain for many moons. My beard is grown long, my hair getting shaggy. The jam space smells irreversibly more like sweat and beer everyday. Well, if we are to believe that time is an elliptical thing in form than no real harm done in wandering your days away in the woods. I have plenty of live shows and comps to post from deep in the archives I just was having a little trouble finding the right thing to really inspire me for the next post. Then two days ago I went over to Noel’s house to listen to the new Sic Alps double album (which is an AMAZING album and also refueled my inspiration!!! Due out on Drag City in the Fall) and while I was there I picked up some files of a session of jam space recordings that Comets on Fire and Growing had made together on a day off in San Francisco in 2005. Like a lot of these old forgotten things that just seemed like beer, friends, loud amps and a dark room with high ceilings during their creation, time has transformed this recording event into an experience full of ghosts and glory upon my listening now. It is altogether more dark, haunted, bombastic and heavy than I remembered it being at the time. It’s strange that only with the passage of time and having forgotten the exact “when” and “why” you did some piece of artistic work can you finally hear it as an outsider with more objective ears. You find the pleasure and admiration of an objective viewpoint, the inspiration of an observer rather than the concerns of an owner. Sometimes these jam sessions with other groups could too easily come off as one of the bands adding to the sound of the other rather than a meeting of minds but on the best days two entities meet in the middle to form a new thing that shines out with the character of both groups in a unique way. Listening now I feel like that has happened quite beautifully here. Another thing that struck me while listening to this session is that the tools and the “sound” of Growing at this time are no longer the tools and the “sound” of Growing today. They are no longer droning guitar and bass through big distorted amps but something very evolved and different and a long way down the road from those roots. To me hearing these recordings feels a little bit like turning the velvet cover back on a birdcage full of memories that have no clear story of your past, just a collection of strange feelings and unexplainable resonance that was no clearer in their original evocation all those years ago. That is not to say that this session was a complicated feeling or that my memories of hanging with Joe and Kevin on tour or recording were complex; quite the opposite. It was a lot of fun, they are great dudes and we drank a lot of beer. All life and relationships should be so simple. What I’m saying is that at the time the music itself felt like good bros, good times and beers and not a greatly resonant piece of music to my ears. Now it holds a more powerful resonance to me since it’s resonance for me has become disassociated from simple “good times”. I hear melancholy, howling, roaring, dancing delicate notes that form complex patterns and tattoo water reflected images across darkly shifting tectonic plates! Great sorrows and pleasures in those drones and hammering marches down old wide streets! Anguished reverb screaming for revenge! Buzzing nonsensical harmonies rolling through subterranean caves! Bats, snakes, dolphins, ocean stones, pillars reduced to broken marble, a field of a million onions under the moonlight! The bubbling of mineral water up from the stones in the last undiscovered foothills on earth! Brilliant child Gods in black satin capes drunk on Sangria and throwing peach pits into the gears of the wheels of time! Etc Etc.

What I can remember about this session is that it was recorded during the daytime at our practice space on 3rd st. in San Francisco most likely between September 1st and the 3rd of 2005. Comets and Growing had toured the Midwest and Eastern U.S. together in June and July of that same year. This is just a few months later and Growing was out on the West Coast to play the first Arthurfest in Los Angeles which Comets also played. I believe this recording session was the night after a Growing gig but I don’t remember if Comets played the gig with them the night before. It was recorded with two PZM mics most likely laid out on the floor at either side of the room between the amp line and the drums, recording to either ¼ inch reel to reel 4-track or an 80’s Tascam cassette 4-track (the latter seems more likely as that was our main machine to use for jam space recordings). We ended up with 6 jams on tape ranging from 7 minutes to over 30 minutes in length. I have taken what I felt was the summary and best of those tracks to present here in the form of what would have been released had we ever decided to. These three tracks are completely unedited and in their original form as I got them from Noel except for a little EQ. It’s possible that he may have edited them when taking them off the original 4 track tape but I doubt it due to their length and rough edges. “Untitled 2” cuts off at 20:45 most likely due to tape running out. The other two seem to run completely through the jams from beginning to end.

All the best to you and enjoy!