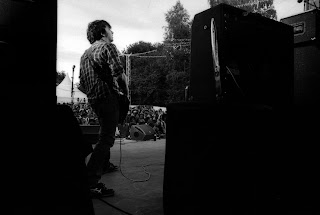 This is the unreleased Electric Six Organs record. It’s a short record because the tape ran out on one song. I think of myself as fairly unsentimental. I am much more of a “fuck the good old days” kind of guy but listening to this for the first time in years the other day took me back for a moment to May 22, 2002. Usually when I listen to a record I’ve made or even happen upon a bygone rehearsal tape I can’t for the life of me imagine what I was thinking, where I was or why it was done this way. Perhaps it is because this tape is so raw and off the cuff but when I listened to it again I could really see the room, remember where everyone was standing, the lighting, the kind of beer we were drinking, for once I could understand where, why and how we did it.

It was made during the Field Recordings From the Sun rehearsals. Ben Chasny decided that he wanted to do an electric project with some of the Six Organs songs. He wanted a mellow groove oriented backing band as a platform and a foil for wild guitar and the Six Organs narrative and asked Comets On Fire to be the band. We set out with the idea of doing a few short rehearsals and then record an album with my Otari 8-track. The album was recorded but never released and in fact these recordings are from a 4 track reel to reel in what I believe was the first rehearsal. In the end the 8 track stuff just never had the same energy we captured that first time so that is why you are hearing that instead of the 8 track recordings, these would have been the release. Unfortunately the tape ran out on the end of “Even if You Knew”. Fuck it. We did tour Electric Six Organs alongside Comets on Fire on the U.S. West Coast including Canada. But this was before Field Recordings came out and really very few people saw us. I think Chasny even designed a record cover for the LP release of this album but at some point it fell from his grace or just fell to the back of the burner and then off the stove completely, I'm not sure which.

I can hear so much of that excited reckless energy in what we were doing with our music at that time in these recordings. In Chasny’s soloing and the general vibe of Electric Six O songs there is this incredible blend of spiritualism and nihilism. I guess to me, that’s often been the complex, struggling and overwhelming element of Six Organs in any of its forms, but I feel like that battle is laid out in a very raw and explicit duel in these three songs. Chasny's soloing was different in these sessions, it had a different tonal character and a different sense of space. Perhaps that has something to do with the groove beneath it--that element of swing groove rhythm isn't common to the Six Organs sound. There are some beautiful ghosts of melodies haunting the feedback on this record that I've never heard him do in quite the same way on later albums. I believe that up to this point Six Organs was still pretty much acoustic on record and live. This was kind of the gateway into the electric Six Organs phase, or the incorporation of electric instruments into Six Organs. That phase has since been incorporated in sometimes more subtle ways and sometimes more extreme ways but the roots of many of those ideas are here as an experiment, a beginning point.

One of my favorite anecdotes of this period, and forgive me if I’ve told you this one before, was on the way to the studio during the Field Recordings sessions at Tim Green's and we were all so excited about recording in a real studio for the first time. We had all the major basic tracks in the can too---in fact originally we had so much material and length that Field Recordings was going to be a double album but we brought it down to just over half an hour in length---good move!) and Chasny was going to lay down solos and perform “The Unicorn” that day and he was seriously hung over and in a fairly black mood and told us if we had any balls we’d take the master tapes from this record when it was finished and pour gasoline all over them and then bury them in a tar pit and dig them up in ten years and release that! For some reason, perhaps because I was on the brink of finishing my first real album and it was such a precious accomplishment to me that the thought of that was so horrifying but somehow wonderful at the same time. That really stuck with me over the years. Chasny wrote me the other day and told me he actually finally did make a record and buried the tapes and was going to dig it up in some years and release it. Pretty killer.

Enjoy!
Posted by Silver Currant at 9:34 AM